A reminder of resiliency and gratitude

by MeccaMotive
in Motivational Stories
33 2
0

Thanksgiving typically is my favorite time of year. Not only are some of my favorite foods involved, but even more meaningfully, it begins a season of heightened generosity.

However, this year — for a variety of reasons — I’ve really struggled to see the light. I was lamenting to a very wise friend when she reminded me about the importance of gratitude.

She was right, of course. No matter what happens to or around me, I have much to be thankful for. And so, as a kind of mantra, I’ve been silently ticking through my gratitude list each day — good health, family, my house, friends … It’s this last category that got me thinking about some of my favorite people who have had struggles much greater than mine. And who, somehow, remain so positive and encouraging.

I first met Rieley when his “Aunt Beets” — aka Carol — worked at the Daily News and he’d get dropped off at our office after school every day. He lived with his grandma then, but her health wasn’t great and so Aunt Beets helped out. I think Rieley was in second or third grade at the time. I looked forward to our daily routine when he’d come to my office and teach me something in Mandarin and enlighten me on any new facts he’d acquired that day. It was through Rieley that I learned about naked mole-rats.

It’s also through Rieley that I learned about resiliency. He may have the hip haircut of a teenager, but he talks with a maturity way beyond his years. I think it’s because he’s had more heartache in his young life than most people do in a lifetime. His mom is absent; his dad struggled with addiction and passed away just as he was getting his life together; and then this year, COVID has kept him from two of his favorite things — friends and school. 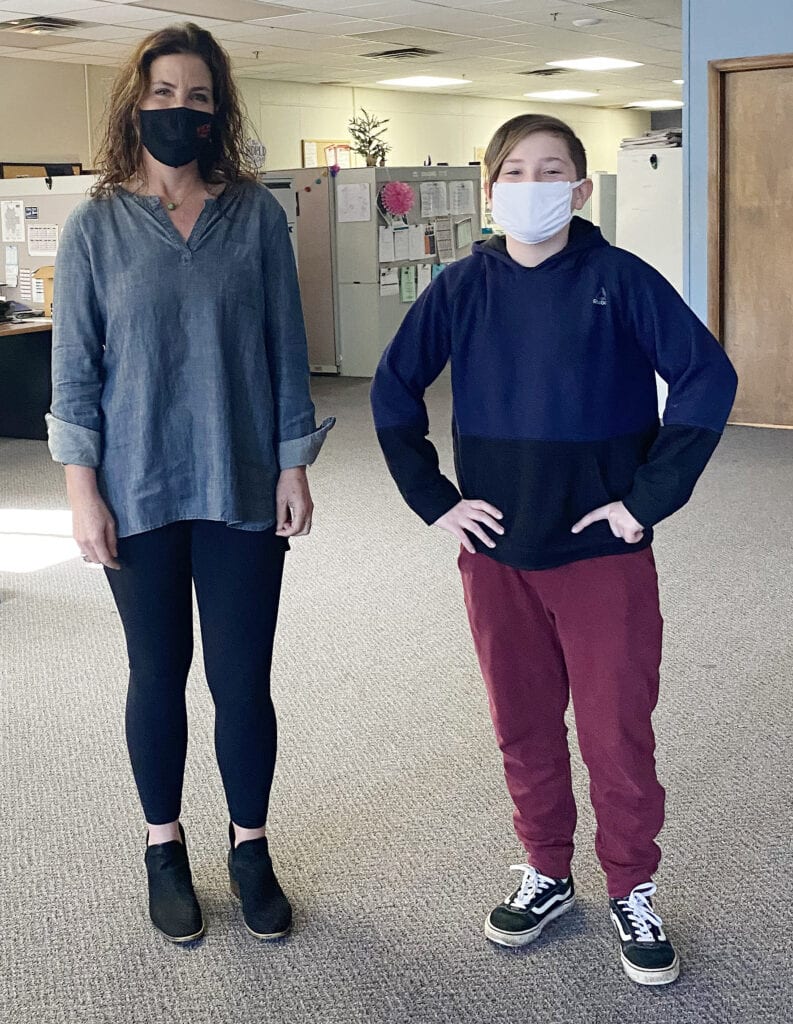 Julie Stafford, left, enjoys a visit with her friend Rieley at the Daily News office in Greenville. — Submitted photo

Both Rieley and I are thankful for his Aunt Beets. He because she’s provided him a loving, stable, structured home for the past five years. Me because of that, but even more because she represents hope.

We need more hope, more role models like Aunt Beets. In her house, respect is a must, trust is earned, honesty is expected, confidence is encouraged, and it goes without saying that you should always have a plan B.

In some regards, Rieley is a typical teenager. He loves spending time with friends, he plays soccer and basketball and the trumpet in the middle school band.

“It’s really amazing that over a year and a half, I learned an entirely new thing and I even got to play in a concert,” he says.

It’s when you talk to him about his influencers and outlook on life that his adult-like wisdom shines through.

His mom? “She was in my life for about four years that I can remember … I don’t love her, but I don’t hate her,” he says. “I just don’t want her in my life anymore. She’s unreliable and not trustworthy.”

His dad? “My dad was awesome. He tried to be there and he did everything he could to be clean. He was just getting his life together when he passed. He’ll always be in my heart and my memories … He taught me never to give up, to always keep going. No matter what situation you’re in, you can get through it.”

How about this pandemic? “COVID is terrible, but it’s given us time to stand back and appreciate life. Look at the positives. I mean look at SpaceX. They just put a crew on the Space Station. This time is a good time to make goals. I set a goal. I wanted to be on the honor roll.” It’s a goal he accomplished this fall.

Resiliency is defined as the capacity to recover quickly from difficulties, or toughness. I don’t think Rieley or Aunt Beets would tell you that’s an easy task. But watching the two of them together, there’s no doubt they share a unique connection. A special love for each other. And it’s obvious they’re finding their way together.

Aunt Beets says she just wants Rieley “to be an outstanding citizen. Whatever community he lives in, I want him to be involved and help move it forward. I want him to be a positive person.”

Rieley wants that, too. His sights are set on one day becoming a military police officer in the Marines with a focus on training dogs. His dad influences this goal. “My dad always wanted to be a Marine and he never got the chance.”

Not only has Rieley demonstrated “the capacity to recover” from his heartaches, but he’s used them as life lessons and motivation to move forward. “Sure things get hard,” he shrugs. “But you have to move on. If you can’t, then you’re never going to move on with your life. You have to figure out a way to move past it. With everything in life, there’s always something to look forward to.”

When it’s my turn at the table tomorrow, I am going to give special thanks to my friends Rieley and Aunt Beets for reminding me about gratitude, about resiliency, about possibility. And most of all, about hope.

Stuff You Should Know Do motivational speakers motivate people

Why You Must Have a Highlight Reel – Carson Heady

The Incurable Plague of Wine Influencers